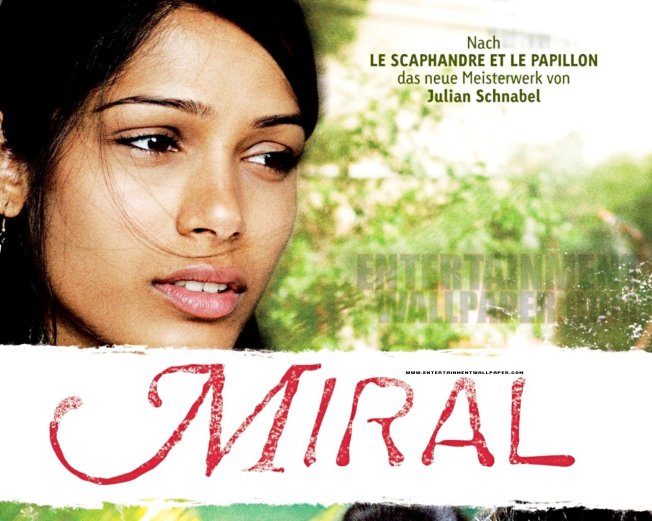 “”It is refreshing to visit the Israeli/Palestinian conflict form a vantage too seldom shared in cinema. Director Julian Schnabel once again proves that he understands human responses in the face of political conflict. Rula Jebreal has adapted her own novel which in turn is a biography of her involvement in the history of the Palestinian conflict. It is a touching recounting of the events that took place form 1947 to the present and it leaves the window open for much conversation.

The film opens with a party held by Bertha Spafford (Vanessa Redgrave) in 1947 when she asks her guest to forget the conflict outside for a celebration of Christmas: the party is attended by both her Jewish and Arabic friends, the centerpiece being the Christmas tree brought yearly by the Husseini family and then replanted to restore the earth. Hind Husseini (Hiam Abbass) is there and meets Eddie (Willem Dafoe), an American friend of Bertha. A year latter in 1948 there is an Arab-Israeli War, the Deir Yassin Massacre, and the establishment of the state of Israel. The wealthy Hind Husseini encounters 55 starving children, victims of the war, and take s them home to establish what will become the Dar Al-Tifel Institute, a school for Arab orphans that within months grew to a population of 2000. The film then jumps forward and we meet Nadia (Yasmine Al Massri), an abused alcoholic who is imprisoned and there meets devout Muslim Jamal (Alexander Siddig) who later becomes her husband: Nadia, unable to change her life, drowns herself when their child is only 7 years old. It is now 1978 and Jamal brings his daughter Miral (Yolanda El Karam) to the keeping of Hind, reassuring her that he will see her on weekends. Time passes to 1988 and the older Miral (Freida Pinto) is victim to the intifada (uprising), is sent to a refugee camp where she falls in love with the PLO leader Hani (Omar Metwally) and commits to the Palestinian movement to secure a land of peace called Palestine that will be free of the Israeli governance and jurisdiction. Hind encourages Miral to follow her heart and convictions: it is the development of change represented by Hind, Nadia, and Miral that personalizes this compelling epic. Though the conflict between Palestine and Israel continues to this day, this film allows us to appreciate the Palestinian response to the loss of their land and home by a international ruling to create the state of Israel.

Cinematographer Eric Gautier mixes the hot sun washed Palestine footage of the real intifada and the result is mesmerizing. The real star of this film is Hiam Abbass who as the gradually aging Hind Husseini brings the story to life. The large cast is excellent with special kudos to Alexander Siddig, Omar Metwally, and Freida Pinto: the presence of Vanessa Redgrave and Willem Dafoe add credibility tot he proceedings but their roles are minimal. Julian Schnabel is to be congratulated for bringing to light the ‘other side’ of the Arab/Israeli conflict. He gives us excellent food for thought.””